A Unique Cast of Characters 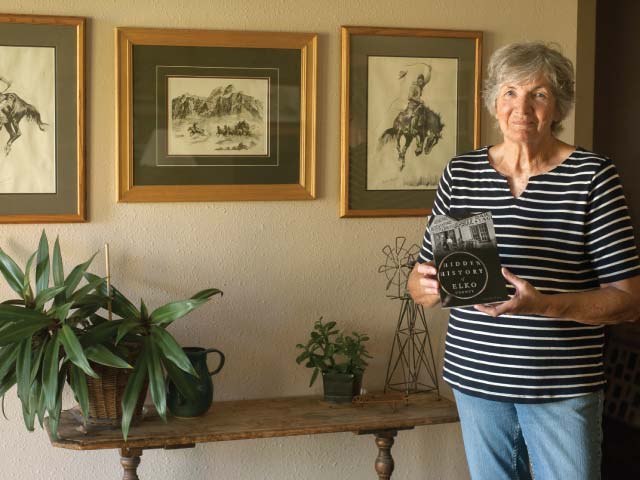 A bartender at the Silver Dollar Club in Elko chose poorly nearly a century ago when he refused to serve Pete Itcaina a drink because the Basque sheep and cattle rancher was dirty and disheveled. Pete, who lived north of Deeth, happened to be a millionaire.

“He walked out and bought the bar that day just to fire the bartender,” says historian and author Claudia Wines. “Then he went back and bought drinks for everyone. By the next day, he had calmed down. He hired the bartender back and leased the bar to him. It’s one of my favorite stories.”

Claudia features Pete in her latest book, “Hidden History of Elko County.” Other spirited, independent people are part of her 160-page book with 62 historic photos. It was published in February.

Claudia discovered details of historical characters’ lives in the archives of the Northeastern Nevada Museum in Elko, where she was executive director for 14 years. She says the stories were too good to be forgotten.

“Some people think history is boring, but it’s not at all when you find interesting vignettes about unforgettable peoples’ lives,” she says.

After Claudia retired in 2015, she had more time to write and fulfill her contract with The History Press. The publisher contacted her before she retired, asking her to write the book.

“I’m busier retired than I ever was working, so I had to get a couple of extensions to finish the manuscript,” says Claudia, 77.

She wrote in her spare time at her home office in Starr Valley, near the family ranch where she was raised.

“I didn’t have a set time every day that I sat down to write,” she says. “I work better without a rigid schedule. I have a huge yard and like to sew, quilt and volunteer at the Art Club Gallery in Elko.”

Claudia knew how much effort it would take to write the book, having authored “Elko County” in 2008. That book—part of the Images of America series—was printed by Arcadia Publishing and featured 200 photos.

In her most recent book, she wrote of people as entertaining as Pete.

Susie Raper, a beautiful cattle rustler, left behind a trail of dead husbands and always managed to charm her way out of arrests and trials.

Born to former slaves, Henry Harris worked as a house hand before becoming one of the most respected buckaroos in northern Nevada.

Hiram Chase cured his alcoholism by burning his hands, requiring them to be amputated. He eventually became a successful grocer.

Austin Peltier was a blind telephone operator with a nearly photographic memory.

While writing the manuscript, Claudia says she knew without a doubt which photos would be on the front and back covers.

“The one on the cover is the storefront in Deeth, which is about 6 miles from my house,” says Claudia. “There are two little girls in it who were raised in the same house on the same ranch that I was. My dad bought the ranch from their dad. I was 4 when my family moved here from Utah, so I like to tell people I got here as soon as I could.”

Two photos are on the back. One was taken on the Ira D. Wines ranch in Ruby Valley. Ira was a great-grandfather to Claudia’s late husband, Gordon. Ira came to the valley as a relief rider for the Pony Express. He eventually bought the ranch.

The other photo is of a branding years ago at the sprawling Spanish Ranch near Tuscarora, where Gordon once worked and where their son, Ira, is now the general manager.

In retirement, Claudia has more time for her two lifelong loves: her family and books.

“I have an extensive library here at my house,” she says.

“I have more books than I should, but I’ve loved to read since I was little—especially well-written books about history.”

Claudia has ideas for other books, too. Her next book will be about Elko County’s history, telling it not only with facts, but through narratives. However, the book will have to wait to be written until after the fall sports season.

“In September, I’ll be going to my grandkids’ rodeos, cross-country meets and soccer games in Nevada and Utah,” she says. “I’ll get back to writing again in the winter.”

Claudia’s books can be bought at amazon.com, and at the museum and the Carlin Trend store in Elko.