Brainstorming ways to celebrate their town’s record-setting past, Carlin Sesquicentennial Committee members had a revelation about the future.

“Along with planning our celebration for the short term, we realized we needed to start a historical society for the long term,” says Melinda Harris, assistant city clerk and committee chairwoman.

“As we did research for a sesquicentennial exhibit, there was a lot we didn’t know even though we live here,” says committee member Ella Trujillo, director of the Carlin Open Door Senior Center.

For example, Nevada’s first public library opened in Carlin. Central Pacific Railroad built it after its tracks reached town in 1868.

“Other libraries at the time were private,” Ella says. “Unfortunately, it burned in 1879 and was replaced by a smaller, less grand version. An insurance company’s map of the town at the time gave us clues about other buildings’ locations.”

Excited about their historical discoveries, committee members wanted to share the information long after sesquicentennial festivities ended. To do so, they established the nonprofit Carlin Historical Society eight months ago. They plan to open a museum in the town’s first school on Cedar Street.

Captivated with Carlin and its history, Melinda, Ella and others volunteered to be on both the sesquicentennial and historical society committees.

They kicked off the town’s 150th birthday bash July 4 with a grand opening and ribbon cutting of the sesquicentennial exhibit at the Carlin Branch Library. Within a year, they hope to move the exhibit to the new museum. The exhibit focuses on the railroad, the ice-making industry and a train crash.

For historical society member Ruth Hart, photos of railroad tracks being laid and a steam engine at the roundhouse triggered childhood memories.

“The railroad was our life,” Ruth says.

“My mom raised us on her railroad job.” Ruth’s mother went to railroaders’ homes with a form to sign that acknowledged they had been called up for their shift.

With the Humboldt River and its tributaries flowing nearby, Central Pacific Railroad officials designated the town as the eastern terminus of its Humboldt Division.

“It was an ideal location because water was needed to cool down the steam engines,” Ella says.

The town was named for Gen. William Passmore Carlin, who camped 1.5 miles up Maggie Creek with a troop of men traveling from Utah to California on a military expedition.

When a post office opened December 4, 1868, Carlin became officially recognized as a town.

“We’re having a special commemorative postmark made,” Melinda says.

To celebrate the town’s birthday, a parade and fireworks display are scheduled for December 1. A time capsule will be made for the town’s bicentennial.

“We’ll also print a cookbook with historical tidbits in it,” Melinda says.

Besides the railroad, Carlin’s nearby water sources stimulated another industry. From the 1890s to the 1940s, ice was harvested for trains and residents. At its peak, 200 workers sawed 45,000 tons of ice in January and February and hauled it to well-insulated warehouses.

For the exhibit, the Leo and Eole Pacini family loaned ice-harvesting artifacts their relatives had used at work.

Trains still rumble through Carlin, although they no longer stop.

“The decline of railroad activity began in the late ’50s when steam engines were no longer used,” Ella says. “It culminated in the ’90s when Union Pacific finally dissolved the Southern Pacific subsidiary.”

After the sesquicentennial celebration ends, one of the historical society’s priorities will be to display artifacts, including coins, dishes and pipes found in 1996 in 13 Chinese railroad laborers’ graves. The graves were discovered in an unmarked cemetery during routine excavation in a backyard.

University and museum anthropologists nationwide studied the exhumed remains before returning them for reburial in Carlin’s cemetery July 3.

Local residents Lee and Johnson Chin, who moved to town in 1983 to open an Asian restaurant, organized a traditional Chinese funeral. About 70 people attended. 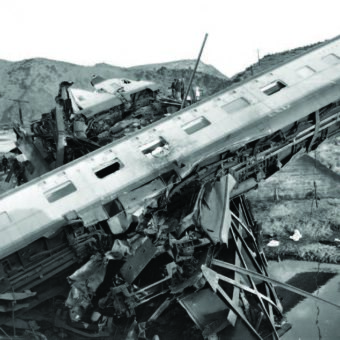 “I didn’t know them, but felt sorry for them,” Lee says. “Now they are at peace.”

Most items found in the graves are at the Northeastern Nevada Museum in Elko.

“A couple of the artifacts are in our exhibit,” Ella says. “We hope more will come to Carlin once our permanent museum opens.”

Melinda says the reburial coincided with the sesquicentennial and is an example of Carlin residents respecting those who played a role in local history.

“After people see the memorabilia in the exhibit, they all have an interesting story to tell about our town,” Melinda says.