Vote No On Question 3

Nearly 60 years ago, a group of ranchers in the Northeastern Nevada joined together to bring electricity to an area that other companies didn’t deem profitable enough to provide service. The ultimate product of their efforts was a not-for-profit, member-owned cooperative called Wells Rural Electric Company and we’ve spent the past six decades focused on delivering on the promise of the “cooperative difference”.

The first part of that promise is securing and delivering affordable, reliable, clean electricity to all of our members. But we also take great pride in enriching the communities we serve and advocating and protecting our members’ interests on the state, regional and federal levels.

This fall, Nevadans will vote on Ballot Question 3, the so-called “Energy Choice Initiative”, which would deregulate Nevada’s electrical generation industry by amending the state constitution but potentially limit WREC’s ability to look out for you, our members. While the cooperative will likely remain in some capacity regardless of the vote, we think this passing Question 3 is likely to lead to long term, substantial increases to the monthly bills of WREC’s residential members.

As a result, WREC’s member-elected Board of Directors has voted to oppose the ballot initiative. Proponents of Question 3 are trying to appeal to voters by screaming “choice” at anybody who will hear them. We hope you’ll choose the cooperative difference by voting no and maintaining access to some of the most affordable, clean energy in the nation.

If you would like to get involved, join the Coalition to Defeat Question 3.

WREC has compiled a breakdown of some of the basic questions we’ve been hearing. We have also included pertinent information we think every Nevada voter needs to know before they place their vote in November.

Report from the Public Utilities Commission of Nevada

In order to gain better perspective on the ultimate effects of Question 3, the Public Utilities Commission of Nevada held 10 days of hearings that included testimony from proponents, opponents and experts about the constitutional amendment.

PUC issued a full report on the expected effects of the Energy Choice Initiative (PDF). Of note, here is the report’s key finding on how ECI will impact Rural Nevadans (found on page 55):

The Average Price of Electricity to Ultimate Customers by End-Use Sector (By State, 2016 and 2015)

The above two Energy Information Administration reports are referenced in our Question 3 FAQ regarding an analysis of electric rates between states. The rate for Nevada’s average residential consumers is below the national average and ranks 20th among all states. California, a deregulated state, ranks 45th and its residents pay 52 percent more than Nevada residents.

The table below, taken from page 45 of EMRF’s 2016 commissioned study Retail Choice in Electricity: What Have We Learned in 20 Years? (PDF), compares the average monthly bill for consumers across rate classes between traditional states and choice states.

We have added highlights to the table to represent WREC’s average usage in each rate class. Nevada will move from a traditional state to a choice state if Question 3 passes, likely raising your electric bill. 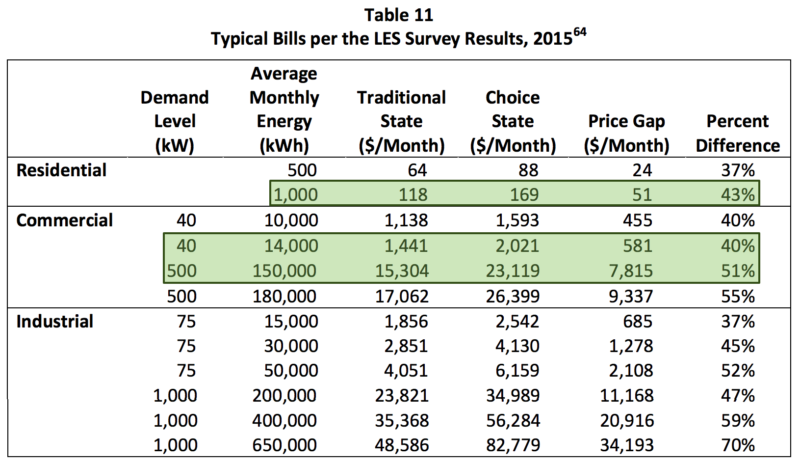