Highlight of the May 16, 2017 Meeting of your Board of Directors 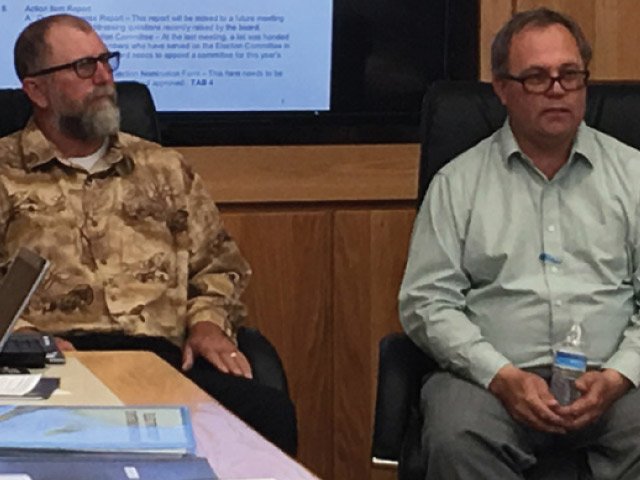 Given that all residents served by the City of Carlin are also members of Wells Rural Electric Company (WREC), there are numerous opportunities for our two organizations to coordinate and support mutually beneficial efforts. It was a privilege for your Board of Directors to meet with Carlin Mayor Dana Holbrook and City Manager David Jones during our Board meeting May 16 to discuss current and potential programs.

Among the more successful programs is WREC’s refrigerator and freezer recycling program. Dave reported that volunteers recently collected more than ten tons of garbage from the Mary’s Wash area. Although discarded furniture and appliances were commonly found among the illegally dumped items, it was rare to find refrigerators or freezers. While WREC’s incentive for turning in older refrigerators and freezers is designed to increase energy efficiency by taking inefficient models out of service, it also reduces illegal dumping. The benefits of this program extend beyond the City, WREC and the environment. Participating members improve their energy efficiency and reduce their individual electricity bills. Even members who don’t directly participate benefit from the reduced need for WREC to acquire additional wholesale power supplies.

WREC and the City also worked in tandem to restore service and maintain safety during an unusually heavy snowstorm November 3, 2015. Since trees had not yet lost their leaves, the snow weighed the branches down into our power lines causing outages. Falling limbs and trees blocked streets. WREC’s crews needed to have the streets cleared of fallen trees to reach the power lines that needed repair. Employees from the Carlin Public Works Department, and others that came to help, needed assurance that the lines were de-energized so they could safely clear the debris. By coordinating restoration and clean-up work, both WREC and the City restored essential services much more quickly and safely.

City of Carlin employees hope that construction will soon begin on a new grocery store. Residents can look forward to having convenient shopping once again while WREC and the City will enjoy providing utility services to another commercial account.

In other business, we approved the agenda for the current meeting, the minutes of the Board meeting held April 18, the summary of those minutes for publication in the June edition of Ruralite magazine, the minutes of the Safety Committee meeting held April 18, and the Safety First Verse. We reviewed and approved the March Form 7 Financial Report, and authorized staff to lock in unusually low fixed interest rates on long-term loans. The Operations, Member Service, Finance and Debt reports were included in the agenda for review prior to the meeting.

We appointed Gerald Anderson to represent WREC as the National Cooperative Services Corporation (NCSC) voting delegate during the Cooperative Finance Corporation (CFC) Forum in June and approved a donation to the CFC Integrity Fund.

We then reported time devoted to Board business between April 19, and May 16.

We received a presentation on emerging trends in Member Services, which included data collected through April regarding the number of members coming into each of the three area offices to conduct business, as well as phone contacts with members, website use, and electronic payment statistics. We also discussed electric vehicle charging stations and their potential impacts and benefits.

The CEO also provided information on power supply issues and reminded the Board that Bonneville Power Administration (BPA) will announce its final rate increase amount at the end of July with the increase going into effect in October 2017.

In preparation for the forthcoming Board of Directors election, we amended the bylaws governing eligibility to serve on the Board. Existing policy excluded any member who had ever had an account written-off as a bad debt. The bylaws were amended to limit that disqualification to five years after the bad debt has been paid in full. We also appointed a committee of members to count the ballots cast by our members for candidates for the Board of Directors and approved the nomination form.